I could If I wanted To!

If i know there will be a loose dog i try to contact the owner ahead of time, and ask that they put the dog up while we pass with the sheep.

This route was a road i drive most days and i did not think there were any loose dogs.

As we came off of the first turn from the graze i saw a Golden Retriever. The dog was loose and bouncing up and down like it had springs. I thought..ohh shit.

The dog's hackles were up and it was in the front yard of a house we were passing. It made a couple of lunges, but was still not that close to the sheep on the road. The Border Collies never even acknowledge it was there, head down working they were.

Then our livestock dog Ella came into sight and took one step onto the yard. I think she was just curious, but i bet the farm dog saw this in his eyes. 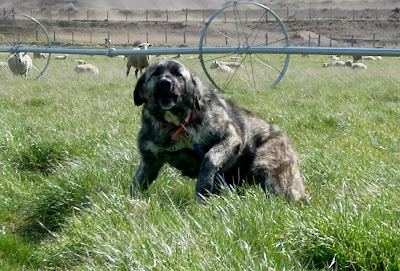 Whatever the farm dog thought of Ella i am pretty sure he said "I could go out and chase those sheep if i wanted to, but i am a bird dog and these sheep are not for me brother!" He then made a 180 deg turn and disappeared around the house. I kept looking back, but he was not to be seen.

Next stop was passing a friends sheep. I had called and ask if she could put her sheep in the corral while we passed. Last time we went by our sheep were fascinated with her sheep and it caused a log jam. She has her rams in now, and my ewes are so frisky the ewe lambs are chasing the ewes and mounting them. The sheep had been moved and we passed without the log jam, except for my friends llama who came down to the fence and reached over to kiss a few sheep.

One time we passed some mules on a fence and those bastards were reaching over trying to grab sheep!

We had a neighbor friend in the truck stopping cars in front as we came up the road. I like to have people wait and not drive through the sheep. I don't worry about sheep being run over as much as dog.

The last turn of the trail was a step blind hill down into our ranch. Marty was in front and he radioed that a neighbors Blue Heeler was out. The turn is always tricky as the sheep don't seem to like the change in up or down hill.

I kept looking for the dog and i finally saw him on the porch. He stood up and took a long look over the sheep. The house is up on the side of a hill so he was above them. I could see him thinking and i think he finally decided " I could run down there and move those sheep if i wanted to, but the sun just hit my porch so i shall leave the silly collies to their work." With that he laid back down.

Down the hill we all went and into the pasture. Another safe move.
Posted by Lana at 4:09 PM