My 3rd showing at Soldier Hollow is now in the books. It was a grand adventure in many ways.

The trip was a long one for a very excited James, and he was less than impressed with the Nevada desert. 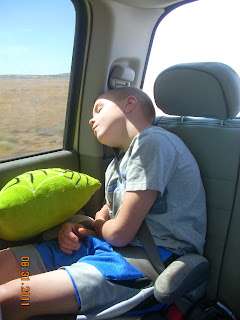 Soldier Hollow is about the sheep and the dogs, but there is also a lot of other fun. With James along this year,  I made it a point to stop and see the world outside of the trial field.

The rescued wild animal show was very fun, with big snakes, skunks and these "sugar babies" just to name a few. 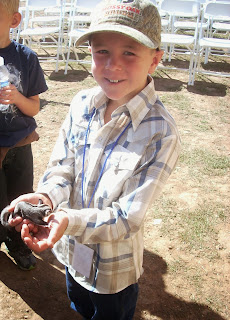 What would a big show be with out somne face painting? James had a Border Collie one day and a VERY cool snake the next. 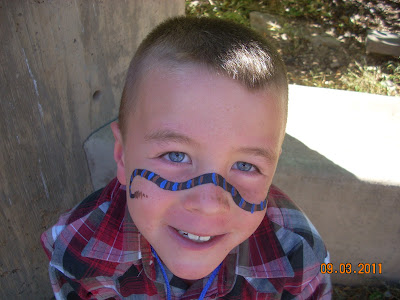 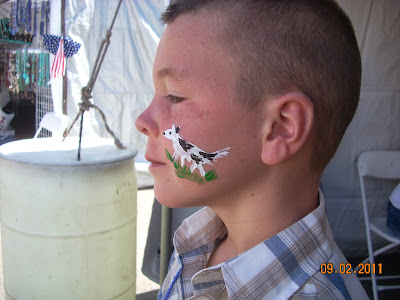 Lots of bike ridding with Kell and the beautiful Herber valley as a backdrop. 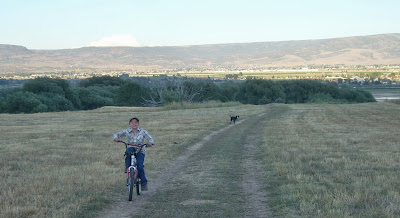 The best part of the trip was the new friends we made. Several other handlers also brought the kids, and being the only boy in the; Rowley Knox Basson Fogt pack, did not bother James in the least. The kids had a blast running all over Soldier Hollow. There are so many events for kids and these kids saw them ALL. 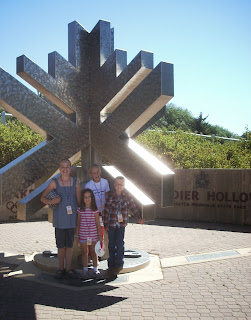 I admit i did not get any pictures of sheep or dogs. Many other people did, and they are better than any i would have taken. James took a pic of the field and it is an amazing course to run on. 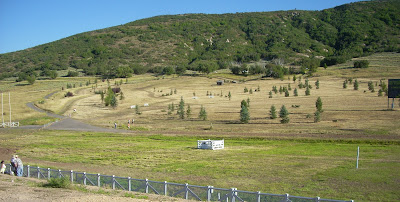 Ok so how were my runs? I don't like to give a blow by blow of runs in my blog, i am more of a big picture gal.  Day 1 i think i was the only handler who sent left. Kell is a good outrunner so i was not worried. He started out nicely and then suddenly took a big flank/turn and ran up into the tall grass left of the cabin. I was surprised, but not worried.

I was not worried that is... until Kell came out of the tall grass. There was a road cut out of the hill and he free fell about 6 feet right on his side and back. Then he went end over end. In the many wrecks i have seen in ranch and trial work, this one may have been the worst.

I stood there in shock and before i could react Kell was up and running full out to finish his outrun. Heart i call that. I could tell when Kell came into his sheep at the top that he was off. We finished the run, but he came off the field and i could tell he was hurt.

Thank God Cheryl Williams had been to a local vet/chiropractor that week and she told me the vet was coming to the trial later in the day. Dick Williams came and got me when the vet got there and she did an amazing job getting kell adjusted and using the cold laser ( my good friend/vet has a cold laser and they are amazing.)

Kell was 100% better by Saturday and he was able to get one more treatment before his run on Sunday.

Speaking of heart.....i was in the on deck tent when Haley Howard ran Ross on Sunday. The sheep were tough all week, but i did not see any really attack a dog, until Haley and Ross made it to the pen.  Ross and Haley had a beautiful run to that point,  and he had done nothing to rattle this ewe.

At the pen the ewe put her head down and made it clear she was going to attack the dog. Ross calmly stood his ground. The ewe attacked him, and he gave one nose bite and went right back down to hold the same ground. Many many dogs would have gripped and held on, bite a ewe in the group that was not the attack ewe, or simply turned off the ewe and gotten away.

The ewe attacked Ross several more times and each time Ross held his ground.  It was an absolutely beautiful display of a brave dog with a big heart.

The sheep won quite a few rounds this year, with many dq's and rt's due to dogs stalling or gripping. The one thing i love the most about Kell is he can move any sheep.  The one thing i hate about Kell is that he has too much eye, and sometimes he wont allow me to steer him.  Kell had a solid run on Sunday, but it was not quite good enough for the finals. We were just not in sync as a team, but I was still proud of him.

I would have loved to have run Nellie or Mint at this trail, and i hope i get the chance to soon.

Most of the handlers were off to the Meeker sheepdog trial after SH, but James and i need to get home. James was starting 2nd grade and had his first football game( pop warner) this week. Our daughter Katy was starting kindergarten and and has her first horse show(gymkhana) this week.  Lots of things i did not want to miss.

We planned to get home Monday evening, but the Gods had other plans. While driving down I-80( about 6 hours from home) at about 75 mph the serpentine belt on the truck broke. This belt controls eveything that spins under the hood...so you cant really steer and the brakes dont work well....kind of like Kell this weekend :)

Thank God this happened RIGHT at an exit that had a town. I am also thankful that we have AAA/plus so towing the rig and trailer was no charge.  Nothing was open on labor day BUT this town had a shop right next to the only hotel in town that took pets.

The last 6 hours of our drive is full of 2 lane roads, with no cell coverage or towns. Not to mention the 8% grade with no guard rail that is a few hours from where we broke down...gulp.  James was upset at first, but i told him there must be a reason we got delayed, and i like to think God was saving us from some worse fate.

The hotel had HBO and James begged me to watch Avitar. I felt sorry for the boy at the point, so i agreed.  I had no intention of ever seeing that movie...not my cup of tea. We curled up with Kell and watched the movie that afternoon, and we both loved it.

The next day the shop opened and after waiting a few hours we were on the road home. We did see some real asses on the last leg home, but no more drama ensued. 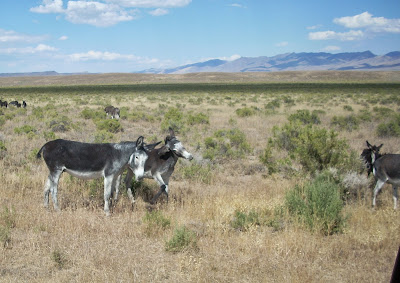 I am home for a few days to enjoy some of our children's "firsts" and to help my beloved wean lambs and catch up on some ranch work. I will be headed out in a few days for the National Sheepdog Finals in Crabondale CO. http://www.sheepdogfinals.com/  I hope Kell will be  feeling 100% and that  maybe his serpentine belt/power steering is also back in gear. I am also running my lil fireball Nellie.
I am making this trip solo,( no kids) but i hope i can remember to stop and smell the roses, like i was able to at Soldier Hollow with the help of my son James.

I leave you with two picture that will make you smile. As the saying goes

I would add " you gotta work that hula hoop like you don't have on a broke up cowboy hat , a lobster shirt and a binky in your mouth" 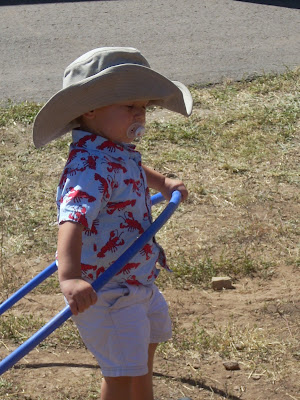 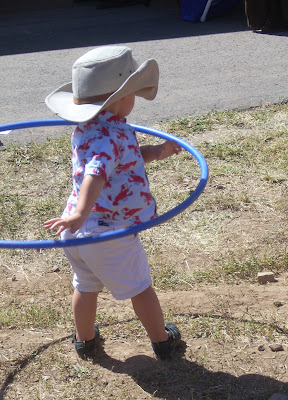 As my friend Lora says in her blog http://rockingdawgs.blogspot.com/ "seize the day!"
Posted by Lana at 10:13 PM