That is the story of our summer. After a brutal spring of bad weather and very slow/no grass growth, we are in the swing of pretty good graze.

This is what a paddock looks like before sheep. Triticale,( a hybrd of wheat and rye) with a sprinkle of alfalfa and mustard. This was to be a field of sugar grass, but mother nature had her plans, and she killed that idea....literally. We sparyed to kill the alfalfa, but as i have said before, it is very tough to kill. 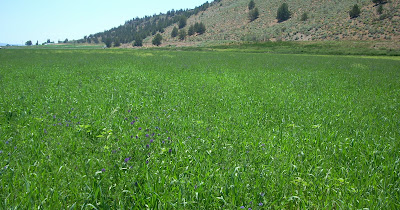 The alfalfa is great food, but the paddocks need to be smaller to prevent bloat. Just a pain in the ass all around as far as i am concerned.  Had the grass come in the first time, it would have shaded and killed the alfalfa.

This is a picture of a paddock that was just grazed and is getting water back on it.  As you can see the sheep are taking it down to the ground. We would prefer to leave more graze, but the mix of triticale, alfalfa and mustard, does not seem lend itself to leaving more residue. This is a picture of a paddock that has been grazed 7-14 days ago, and had water. We have not put on any fetilizer other than what the sheep have left. We would have added some sooner if we had to do it again. 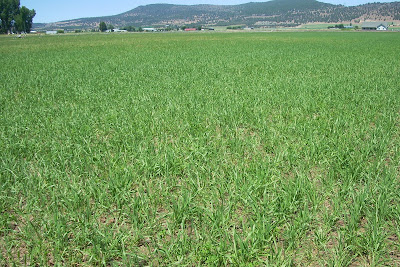 Added to the mix is the fact that the irrigation ditch next to our fields is "subbing."  Our irrigation water is pressurized( no pond, pump, well or open ditch) but some of the farms/ranches around us are in a different water district. The water in that district comes in an open ditch. ( This dist hopes to be all pressurized in the next year or maybe two)
These ditches did not have water in them last year due to drought and politics. That means that this year, the ditches leak/sub as a result of not having water in them last year. The alfalfa seems quite happy with the damp ground, but the triticale without fertilizer is not so happy.  On our pastures the sub just means damp ground, but no standing water. For that we are thankful, as standing water would not be good for the sheep in many ways.

We have had mastitis issues that we do attribute to the damp ground, this was mostly before the graze took off and we were not able to move the sheep as often.  Several of my neighbor do have some standing water in their pastures, and we have some in our dry land.  Not all of the our pastures have damp ground, but the water table in them is very high. This makes it tricky to water the areas that need it, because standing water can develop and "burn" the graze in these areas.

The ditch riders are working their tails off this year, and they do an excellent job trying to manage these year to year changes.  We are grateful that we have water period.
That is one of the many factors of this years graze season that is out of our control, so like the rest of ranching, we are just going with the flow...pun intended :)
Posted by Lana at 2:18 PM