We were in a need of a new LGD after loosing our beloved Boomer this fall. Boomer was a wonderful guard and the pup will have some big shoes to fill. Boom was an amazing lambing dog. If you went out to check the pasture and ewe was having trouble( either lambing or cast) he would stay with the ewe and bark until you came and checked it out.  We never lost a lamb on Boomers watch and he was so gentle with the kids. Whenever the kids were in the pasture he followed them around like a puppy.

These dogs are so noble, brave and devoted. It is impossible not to have immense respect and love for them, but they do need to earn it.  Boom was well loved, and is greatly missed. RIP good dog. 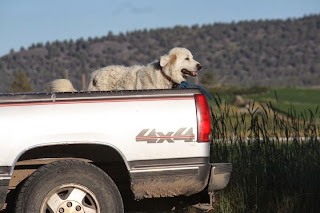 The new pup is from Janet McNally's lines http://www.tamaracksheep.com/.  Janet has been breeding these dogs for over 20 years and they are tested on her commercial sheep operation. Janet's Minnesota farm is in bear, coyote and wolf country.   The parents are owned buy the Lewis ranch  http://www.whitedorper.com/   There the LGD must guard 1,000 ewes over 1,500 acres in southern Oregon.  Proven lines and proven ranch dogs.
I had many pups to choose from, and i picked the pup that reminded me the most of Boom. Not in looks so much as his personality.   The kids greet the new pup like they do all pups, much love. This pups sire is a litter mate to one of our other LGD, and the dam is a sister to Geri's bitch Shasta. 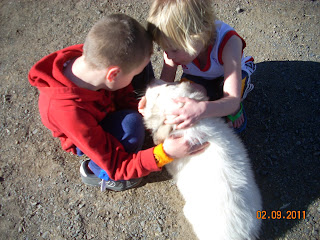 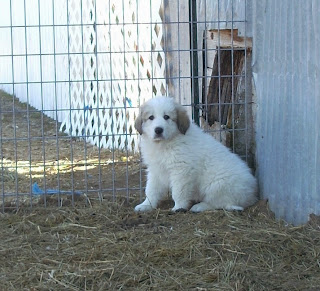 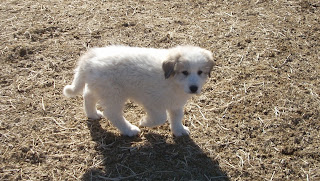 These are the ewe lambs the new pup will have to "guard" for a few days until he settles in. Soon he will learn about electric fence and more sheep....not in that order. 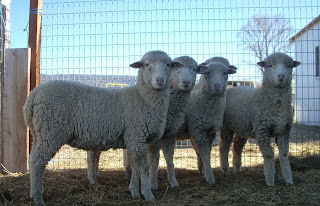 If anybody is in need of a new LGD the Lewis' had a buyer back out and they have a male left.
Posted by Lana at 1:23 PM