It was a busy day today. It started with getting up early to take the kids into a junior rodeo in town. They both wanted to “mutton bust”, aka ride a sheep out of bucking chute while you hold on to a rigging just like the big boys. James has done this a few times but it was Katy’s first go. James was quite and nervous the whole time we waited for our turn. Katy just wanted to ride and showed not an ounce of fear. Katy checking out the ride and the ride checking out Katy. 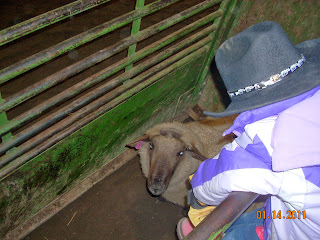 Katy was 1st and she made 7 seconds of an 8 second ride. She was one of only 2 girls in approx 15 kids ridding. She was so pumped when she got off the ground she immediately wanted to know when she could go AGAIN, and when she could start ridding the steers J A cool customer that lil cowgirl.
The sheep were mostly blk face, but there one Jacob cur with big horns that curled back. As we waited our turn James must have said 10 times “I sure hope I don’t get the one with horns! Well you guessed it… that was the one James drew.
James held on the full 8 seconds for a score of 60 and enough for 1st place in his age group. I think only 4 or so kids held on the full 8.  He won $27 and you would have thought it was 27 million. As nervous as James was when he hit the ground he bounced up and flew back to the chutes so excited his eyes were spinning. Adrenaline my boy, I understand the love of it very well, and so does your father J In the pic James gets some last second advice from dad. I was so excited just watching and cheering like a wild women( yup i am so one of "those" moms) i did not get any actual "ride" pics. 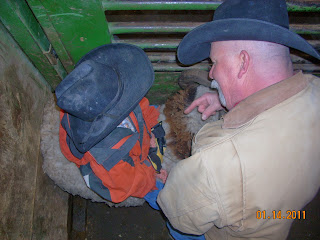 We didn’t stick around for some of the other events as we still had sheep to feed at home. I think the kids want to get more involved in some of the roping and ridding events, but I am not sure we are ready for that much commitment just yet.
After we feed Marty got a call from the neighbor saying somebody was up on our ditch road against the hill, and the vehicle was not familiar to the neighbor. Marty went up to "take a look" and found some folks stuck in the mud. Turns out they are renting a house at the other end of the road, and they could not get to it that way because of the mud. It has been raining on frozen ground here and it is messy.
Marty came back to the house and got the pickup to pull them out. When he and James didn’t come back I called and he said ohh he got the people UN stuck, but while he was backing around he dropped his tire of the edge of the bank. Now Marty was stuck. The people called a mutual friend who brought a tractor to pull Marty out.

As the guy was pulling Marty out the front of the truck slide at a 45 deg angle down a 45 deg bank. James was not in the truck at this time. Thank goodness. They got the pickup out with no damage and the boys came home 3 hours after they went to "take a look."
In police work we have a saying “no good deed goes unpunished” When Marty got back we both started to say the saying at the same time J Really thou helping a neighbor or a stranger is very much part of small town/rural USA and one of the things I love about living here.
Posted by Lana at 6:21 PM