Feeding hay is actually a chore I mostly enjoy. It is a time to look over all the sheep, and I get to spend that time with my favorite husband. Marty feeds and I drive. Some times 7 year old James drives, but this feeding area is tricky and if he is not on point the truck could easily drop into a very deep ditch.
We mostly( I say mostly because if we get a lot of snow we bring them down to the pasture behind the house) feed our sheep in our dry land as opposed to our pastures. We have some land on our ranch that is not irrigated, it is hilly and the soil is sandy. This makes feeding a lil trickier, but the sandy soil never turns to mud, and I like the fact that the ewes get exercise going up and down the hill.
Our ewes are about 85% fine wool sheep( a cross of Rambouillet and Targhee with a slash of Finn) , but we still have a few Coopworth and Cheviots. We sell our wool to Columbia scouring which is Pendleton wool http://www.pendleton-usa.com/ They make men’s and women’s dress shirts from our wool.

The less vegetation you have in the wool the happier the wool buyer is. The area where we feed requires us to be up above the sheep on a road, and then drop the hay down into the dry land. The sheep pile up and get under the hay causing it to land on the sheep’s back.

We use a dog to hold the sheep off of the top of the hill until the hay is dropped on the ground. The dog walks along the top of the hill as we feed down the fence. The sheep are used to this and most of the fine wool all go with the program. The Cheviots are another story.
.
We have a ewe “256” she is a North Country Cheviot and Hamp cross that we have had for at least 8 years. She not only produces huge twins each year, she is also our 5 year old Katy’s “friend.” Now ol 256 has never been handled and is not a show sheep. One day several years ago this ewe came running up to our daughter and allowed her to hug and pet her. I don’t know why. Katy has a way will animals and this ewe does not seem to like any of the rest of us. Katy can go out into the mob of sheep and call “256” at which point this ewe comes running. Weird but true.
Along with being Katy’s friend she is also a real pill with dogs. She is a ferocious mamma when she has lambs and in general always turns to say “make me” if she is at the back of the mob.
Last week 256 decided the whole stay off the top of the hill until the dog moves program was not working for her. She wanted her hay, and she wasn’t going to wait for some collie to tell he when she could eat.


My Border Collie Mint was waiting for 256 when she came up to hill. 256 put her head down and charged the dog. Mint bite her about 5 times in the head/nose before I could say a word. 256 re accessed her position, backed up and came at the dog again. Mint was still standing her ground and again rattled off some good nose bites. At this point 256 decided she was not really THAT hungry anyway, and she sauntered down the hill.
Today I had a camera with me and I got a picture of 256 and Mint having a lil “talk.” No biting was necessary but I think Mint’s ear set says “ do you remember me dear?” I guess 256 did as she did not charge the dog today. Note the livestock guard dog peaking over the sheep to see if there are any fireworks :) 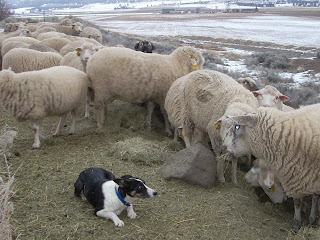